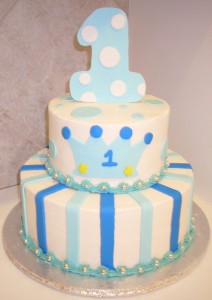 Today marks the one year anniversary of the first article posted on DenairPulse! So far, we’ve published one hundred and one articles and had well over twelve thousand page views. Many of you follow us via Facebook and we’ve had another fifteen thousand views there. We will continue to bring you news about the community, the schools and the people who make Denair a great place to live.

Additionally, you can be notified of new posts on DenairPulse by subscribing via e-mail, using the Get DenairPulse via E-Mail form in the top right corner of every page. That way you’ll never miss important news about Denair!

In trying to change the culture of the Denair High football program, Ted Howze knows that winning is important … but that learning how to win is a close second.

Friday night’s 15-8 overtime loss to Delhi is a prime example.

The Coyotes twice were within a few yards of the tying or go-ahead scores, but came away empty both times. In a physical game where defenses dominated, that made all the difference.

“Part of the situation with our team is we’re still trying to figure out how to win close games,” said Howze, a first-year coach who took over a team coming off a winless season.

Building a belief among his players that they can compete – and win – has been a priority for Howze and his staff. What the Coyotes lack in size or numbers (just 22 varsity players), they make up for in determination and hustle.

Two victories in their three preseason games were a solid start in preparation for the Southern League schedule, which began Friday against Delhi.

Denair capitalized on a turnover to score its only touchdown late in the first quarter. The Coyotes recovered a fumble on the Hawks’ 34 yard line. From there, they used their multiple-option run offense to move inside the Delhi 10. On the ninth play of the drive, quarterback Dominyc Silva reached the end zone on an 8-yard run.

A successful two-point conversion gave Denair an 8-0 lead, which it maintained at halftime.

Delhi tied the score on the first play of the second half when quarterback Garret Thomas completed a short pass to Sergio Hernandez, who broke two tackles on his way to a 49-yard touchdown. The Hawks ran for a two-point conversion to make the score 8-8. END_OF_DOCUMENT_TOKEN_TO_BE_REPLACED 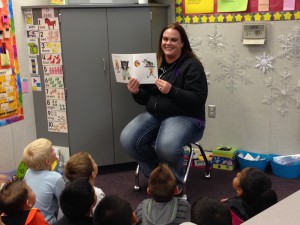 Family: My husband James and I have been married for 10 years, and we have a 4-year-old daughter who is in transitional kindergarten at Denair Elementary School.

Experience and education: I graduated from Modesto Junior College with an AA. I then attended CSU Stanislaus where I received my BA in liberal studies with a concentration in English. I also minored in speech communications. I have a multiple subject teaching credential as well as a supplemental English authorization. I did my student teaching in Denair and was then hired to teach first grade. I have been teaching for 12 years, all of which have been in first grade at Denair Elementary School.

What is your favorite teaching tool or activity? I love technology! A few of my favorite technology tools are my ELMO (document camera), projector and computer. We live in a technology-driven world and technology is a great way to engage students in learning. As much as I love technology, I also love a plain old piece of paper and a pencil. There is so much that we can learn and create using just the basics like paper and pencil.

How has Common Core affected your classroom strategy? Common Core has increased the amount of student conversations happening in the classroom. Students not only need to master concepts, but they need to be able to explain and defend the reasoning behind their answers. Common Core really allows students to think deeply and have meaningful conversations about their learning. END_OF_DOCUMENT_TOKEN_TO_BE_REPLACED 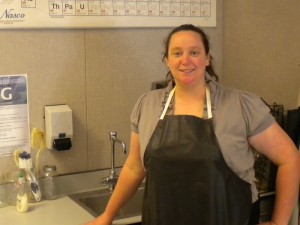 A traditional physics teacher introducing Newton’s Second Law of Motion to her students might write this on a board in front of the class: “Force = Mass x Acceleration.”

Not Breanna Vaughan. She used a simple bathroom scale, her Toyota Tacoma and the muscle of some willing students to bring Newton’s theory to life.

So much for tradition.

“My approach to science is that I try to make it fun for students,” said Vaughan, who joined the staff at Denair High School this year. “Kids learn more when they’re having fun. I always try to have real-life applications for them. I try to emphasize what jobs might use the kind of science I’m teaching.”

For her lesson on Newton’s Second Law of Motion, Vaughan literally parked her white pickup in neutral on the pavement outside her classroom. Two students placed bathroom scales borrowed from the nearby gym and someone’s home against the truck’s front bumper and then leaned against them to make the pickup move. Other students kept notes about how far the truck rolled in a certain amount of time.

The exercise illustrated the concepts of “force” (measured in kilograms via the scales) and “acceleration” (measured in meters per second). From that, students were able to determine “mass” (how much the truck weighs).

In her anatomy/physiology class, Vaughan introduced the subject of tissue engineering – essentially, building “replacement” organs or body parts for people. She asked her junior and senior students to write an essay, requiring them to answer thought-provoking questions about a sometimes controversial topic.

“If your brother went off to war and lost his leg, would you want it? If your grandma needed heart tissue, would you want something new to make it beat?” Vaughan explained. “This is what I do. Tissues could be boring, but I try to make them think. We had a good discussion.” END_OF_DOCUMENT_TOKEN_TO_BE_REPLACED

Austin Hughes ran for two touchdowns, including the winning score with a minute and a half left in the game, and Denair’s defense came up strong in the second half as the gritty Coyotes rallied for an 18-14 non-league victory over Argonaut on Friday night at Jack Lytton Stadium.

Denair (2-1) dominated in many phases of the game. The Coyotes’ power running attack generated 68 plays on offense to Argonaut’s 30 and helped Denair hold the ball for more than 34 of the 48 minutes. Still, a few ill-timed mistakes and two touchdowns by Argonaut (0-4) in the second quarter left Denair trailing 14-12 at the end of three periods

The winning 78-yard drive began after the Coyotes’ defense stopped Argonaut on downs late in the third quarter. Denair methodically marched down the field behind Hughes (15 carries, 116 yards) and Alex Valle (18 carries, 87 yards).

A key play came when Valle connected on a pass to sophomore tight end Justin Steeley, who shook off a big hit by Argonaut to hold on inside the 10-yard line. Hughes scored the winning touchdown on the next play, capping a drive that saw Denair run almost 9½ minutes off the clock.

After the Coyotes missed on a two-point conversion attempt, their defense held Argonaut to a short run and three incomplete passes to end the hard-fought game.

“We moved the ball really well all night long. They did, too, but both teams couldn’t capitalize,” said Denair Coach Ted Howze.

The game started well for Denair. Argonaut fumbled on its very first play, Denair recovered and Hughes scored his first touchdown on the following play. After an Argonaut punt, the Coyotes were poised to score again, but a fumble stopped that drive.

Argonaut then put together its two best drives of the night, scoring back-to-back touchdowns to take a 14-6 lead midway through the second quarter. END_OF_DOCUMENT_TOKEN_TO_BE_REPLACED