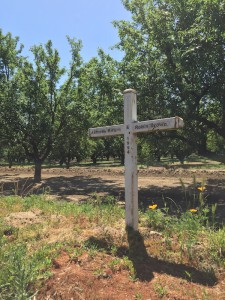 July 17, 1994. It’s the day when the arc of Michelle Stevenson Fuller’s life was forever altered. The day that two of her Denair High classmates died and she was seriously injured. All were passengers in a car being driven by a drunken driver.

In the blink of an eye, so much changed, so much was lost.

Fuller’s scars – physical and emotional – remain. So does the white cross on Zeering Road, marking the site of the incident.

Friday morning, Fuller, now 38 and a mother of two, shared her story with students at her alma mater who were not yet born in 1994. Her speech was part of the school’s “Every 15 Minutes” presentation, which involved a simulated crash scene, multiple “deaths” and a memorial service to emotionally underscore the dangers of drinking and driving.

But there was nothing made up about Fuller’s example.

Not quite two months removed from graduation at Denair, she and some friends were at a party in Turlock on a typical summertime Saturday night. Music was playing. Teens flirted. And alcohol was readily available. Someone in the group knew of another party in Denair. So six teens piled into a four-seat Suzuki Sidekick with a girl who had been drinking.

“It was a solo accident; no one hit us,” Fuller said. “She lost control and overcorrected. The CHP estimated we were going 80 mph.”

The Sidekick rolled 2½ times and ended up against a tree. One of Fuller’s best friends was killed. So was a boy who was a junior and had jumped in the vehicle just to get a ride to the next party. END_OF_DOCUMENT_TOKEN_TO_BE_REPLACED 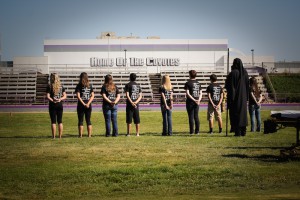 Imagine, if you can, being zipped into a body bag, taken to the morgue and pushed into a cold, dark space. Ashley Ramaley can. It happened to her Thursday.

Imagine, also, being whisked by helicopter or ambulance to the nearest hospital with critical injuries suffered in a horrific car collision. Imagine that all the emergency measures weren’t enough, that you were pronounced dead and your family members were brought to identify your body. Jose Fuentes and Yulissa Tafolla can. They had it happen to them Thursday.

And finally, imagine being the cause of so much pain, suffering and grief. Weston Fair can. He was the drunken driver behind the wheel Thursday in an “Every 15 Minutes” simulation played out at Denair High School.

It was a frightening, heart-breaking and, yes, sobering reminder to Denair’s students and others of the dangers of drinking and driving.

“Alcohol abuse and drunk driving is an avoidable epidemic that brings untold grief and tragedy to thousands of Americans each year,” said Denair Superintendent Aaron Rosander. “It is so critically important that we educate and impact the lives of our teens in powerful and lasting ways that will save lives and create a safer, healthier future culture. … Such activities serve to honor and protect the most wondrous gift of all: life!”

In reality, no one died. But that didn’t make the emotions any less real or raw for the 270 students the presentation was directed to, the 30 teens who one-by-one became “victims” throughout the day or the loved ones they left behind. END_OF_DOCUMENT_TOKEN_TO_BE_REPLACED