She will succeed Aaron Rosander, who will leave in June after four years as superintendent. END_OF_DOCUMENT_TOKEN_TO_BE_REPLACED

The Denair Unified School District board narrowed the list of applicants to become the next superintendent to four finalists at a special meeting Monday night.

Trustees also announced the names of nine employees and community members who will participate in two days of interviews this weekend that will lead to the selection of the next superintendent.

The board’s search for a replacement for Aaron Rosander has been guided by consultants from McPherson & Jacobson, who helped trustees winnow a list of 21 applicants to the final four. Rosander announced in February he will leave the district at the end of June after 4½ years.

Chief Business Officer Linda Covello, the district’s lead official for the search, said applications were received from educators in Stanislaus County, other parts of California and outside the state.

Two finalists will interview with trustees as well as the stakeholder committee on Saturday and two more will do the same on Sunday. The meetings are not open to the public.

The committee will provide input and insight about the finalists to trustees, who expect to decide on a new superintendent Sunday night. Once that choice is made, McPherson & Jacobson will conduct a final round of background checks before an offer is extended.

That person is expected to be introduced at the May 10 board meeting, with the new superintendent in place by July 1.

The Denair Unified School District, Board of Trustees, Denair, CA, is soliciting input in the superintendent selection process. Numerous meetings have been scheduled with the consultants from McPherson & Jacobson L.L.C. to receive input. We realize not everyone’s schedule allows attendance at one of those meetings. Please provide your input by answering the questions in the survey by visiting www.dusd.k12.ca.us. The survey is available in both English and Spanish. The last day to participate in the Stakeholders Survey is Monday, March 12, 2018. 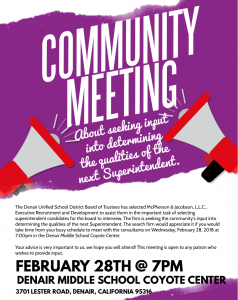 The Denair Unified School District Board of Trustees has selected McPherson & Jacobson, L.L.C., Executive Recruitment and Development to assist them in the important task of selecting superintendent candidates for the board to interview.

The firm is seeking the community’s input into determining the qualities of the next Superintendent. The search firm would appreciate it if you would take time from your busy schedule to meet with the consultants on Wednesday, February 28, 2018, at 7:00 pm, in the Denair Middle School Coyote Center.

Your advice is very important to us, we hope you will attend! This meeting is open to any patron who wishes to provide input.

The Denair Unified School District Board of Trustees voted unanimously Thursday night to hire a Lodi-based consultant to lead the search for a new superintendent.

The board called a special meeting to deal with the impending departure of Aaron Rosander, whose contract expires at the end of June. Rosander has led the 1,272-student district since February 2014.

In open session, the five Denair board members and Chief Business Officer Linda Covello interviewed two companies by phone Thursday night. Both are experienced in executive searches and recruitments related to education.

Representatives of McPherson & Jacobson as well as Leadership Associates were asked questions separately for about 25 minutes each about their processes and results.

Trustees then discussed the merits of both proposals for nearly an hour before voting to hire McPherson & Jacobson, whose headquarters is in Omaha, Neb., but has offices all over the country. Retired schools superintendent William Huyett of Lodi will lead Denair’s search.

Covello said the cost to the district will be between $8,500 and $13,650, paid for by so-called “one-time funds” received and saved over the past few years from the state.

She expects McPherson & Jacobson to present an outline of the recruitment timeframe at an upcoming board meeting. The company also intends to gather input from staff and community members about what they want to see in a new superintendent.