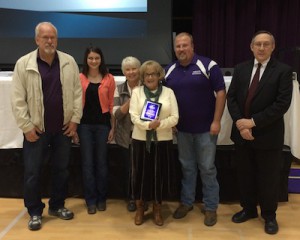 Denair Unified School District board member Louisa Allen was honored for twelve years of service at the November meeting, held in Denair Middle School’s Coyote Center. She was presented with a plaque, thanking her for her service to the district, by Dr. Walt Hanline. Allen served three terms, starting in December, 2001, running through November, 2013. Prior to serving on the board, Allen was a paraeducator at Denair Elementary School for twenty-four years, directly serving hundreds of Denair’s students.

After the meeting, Allen said, “I thoroughly enjoyed being on the school board, even now when we are on a very bumpy road.  I tried my best and hope the citizens of Denair realize we all have tried our best. Thank you to the citizens that stood behind me during the good and bad times. I want to thank all of the members on our staff, for all the hard work they have done to make our district one to be proud of.  I wish the new members good luck and enjoy the ride as I did.”

While Allen isn’t a product of Denair’s school system, all three of her children, as well as three of her grandchildren, attended school in Denair. Allen said one of the things she’ll most miss is handing diplomas to the 2014 Denair High School graduating class in June.

At the December, 2013, meeting, Sandi Dirkse and Kathi Dunham-Filson will join the board, bringing it back to five trustees. The board has been operating with four trustees since the resignation of Julian Wren, earlier this summer.

3 thoughts on “Louisa Allen Retires from DUSD Board”