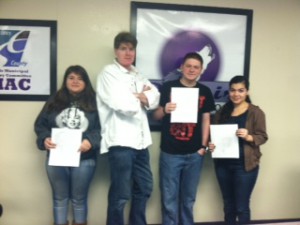 On March 6th, 2014, Denair Charter Academy had the pleasure of welcoming artist, Jerry DeCaire. Mr. DeCaire is an artist whose works include The Wolverine, X-Men, Thor, and one of his own creations, Malachi. He spoke with students about the way he uses math and science to create these well known characters. Through the use of geometry and proportions, he demonstrated elements like bird’s eye view, and worm’s eye view. The students sat in quiet awe as they watched Mr. DeCaire transform a cube into The Wolverine. He showed his mastery of the human body as he named and meticulously drew each muscle of the character. Students eagerly raised their hand to answer his questions and receive a personally autographed drawing. Destiny Lebow Ramirez, Ricky Robertson, and Lizbeth Cadenas were the lucky winners who received autographed, original work . All students in attendance received a photocopy of the full body drawing of Iron Man.