Two teachers who dedicated 35 years to educating children and a former high school principal were honored for their retirements recently by the Denair Unified School District board of trustees.

Becky Julien started working in the district in 1979. She spent her entire career at the elementary level teaching second, fourth and fifth grades. She also served as the Pathways teacher and coordinator as part of the Denair Academic Avenues program. In her career, she was recognized with the prestigious School Bell Award and as one of the Rotary Club’s Outstanding Teachers.

“She is always positive and super creative,” said Carol Hammond, who taught with Julien and later became the principal of the elementary campuses. “Her motto is, ‘Enjoy life.’ ”

Hammond credited Julien with helping to shape the D2A curriculum and Pathways program, especially in fine arts and music, and for organizing the Friday assemblies. She also leveraged her love of gardening into formation of a Green Team for elementary students.

“She is known for teaching the whole child,” praised Hammond. “She is always learning, always inspirational.”

Christopher Hawkins also began his DUSD career in 1979. He led classes at the third, fifth and sixth grades, the Community Day School and has taught independent study students the past several years as part of Denair Charter Academy.

Hawkins also was involved in clubs such as chess, gardening and video production during lunch and after school. He also was a popular referee during the fifth grade vs. staff basketball games.

“His humorous nature could always be counted on to keep our students laughing during special events,” said Fawn Oliver, the district’s director of student support services.

Jerry Savelson joined the Denair Unified School District in 2002 as principal at Denair High School. In 2009, he requested a return to the classroom and became part of the staff at Denair Charter Academy teaching independent study.

He previously taught at Turlock High School and was assistant principal at Linden High School.

“He attacks everything with integrity and professionalism,” said Michelle Bush, principal at Denair Charter Academy. “He’s a top-notch mentor, to a lot of these young men in particular. He shows concern for students, but does it in a way that maintains high expectations.”

Savelson is known for his love for his family, fishing and the San Francisco Giants – and his workspace reflected that with photos and knick-knacks. His real-life experience in the restaurant industry before he became a teacher also helped him shape lessons for students.

“I taught next to him,” said Bush. “You just learn from him. He was very much a role model for other teachers.”

Julien, Hawkins and Savelson each were presented a crystal clock by the district as thanks for their service. The symbolism of the clock was to represent “the irreplaceable time spent in education over the past many years and the well-deserved and wondrous time that lies ahead in retirement,” said Superintendent Aaron Rosander. 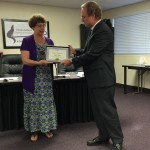 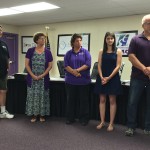 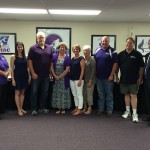