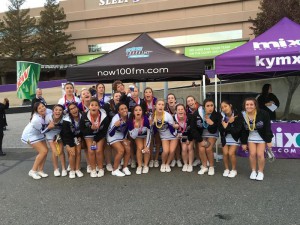 Twenty members of the Denair High School cheerleading team performed at halftime of the Sacramento Kings game on Sunday at Sleep Train Arena in front of more than 17,000 people.

The squad has known for about a month of the opportunity, which was arranged by coach Robyn Hilton.

The Coyotes cheerleaders were given a minute-long routine and the accompanying music about two weeks ago so they could begin to practice, said assistant coach Hannah Yanez. The Kings asked them to arrive Sunday by 9 a.m. so they could rehearse the steps.

The team joined five or six other high school cheerleading squads and dance groups for the routine at halftime, which wasn’t until about 7 p.m.

“They really enjoyed it and had a good time,” Yanez said. “It’s exciting for them to perform in such a big arena and with other groups.”

It was the second time in two years that Denair’s cheerleaders have appeared at a professional sporting event. Last fall, they performed in Oakland at a Raiders game.