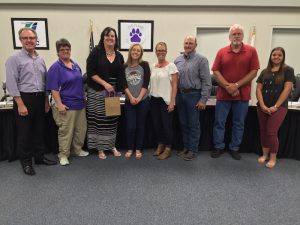 The proposed budget envisions spending $13.5 million in the next school year as compared to about $13.3 million in 2015-16. The difference, explained Chief Business Officer Linda Covello, mostly is due to the 1% pay raises previously approved for all employees plus state-mandated additional contributions to their retirement funds.

There will be two teaching positions added at Denair Elementary Charter Academy to expand the dual-immersion Spanish language program to the first grade.

Extra money received from the state the past few years will be used to buy new 31 new computers for the Denair High School lab as well as innovative Spanish programs for all campuses and a new math curriculum for the elementary campus. Covello said committees composed of staff members are in the process of identifying additional needs across the district. Because the money comes from one-time reimbursements from the state, Covello said it is best invested in equipment, programs or maintenance upgrades that are not ongoing and do not need to be funded each year.

The 2016-17 budget remains lean because the district still projects a slight decline in enrollment. Each student is worth about $8,000 in state funding based on average daily attendance (ADA). In the past five years, ADA has fallen from 1,535 students to 1,275.

Covello projects Denair to have 1,228 students next year – about a 2% drop from 2015-16. Most of the decline continues to be at the middle and high school campuses; enrollment at DECA and Denair Charter Academy has grown in the past three years, but not quite enough to offset losses at the two other campuses.

Like many districts in the Central Valley, Denair also receives additional state funding based on how many qualified low-income, English-learners and foster youth students it enrolls. Students can qualify in only one category.

Covello said the budget forecasts an ending balance of $3.3 million, which includes about $600,000 in restricted funds that only can be spent on one-time projects.