Denair Elementary Charter Academy has received recognition for its implementation of a national program that supports proper behavior by students on campus.

Known as Positive Behavioral Interventions and Supports, or PBIS, the program offers a range of “evidence-based interventions to achieve academically and behaviorally important outcomes for all students.”

According to the PBIS website, “the important supportive relationship between positive school- and classroom- wide culture and individual student success is emphasized.”

DECA is among hundreds of schools in California that follow the PBIS standards. In recognition, the campus received a bronze medal for 2016-17 from the California PBIS Coalition. 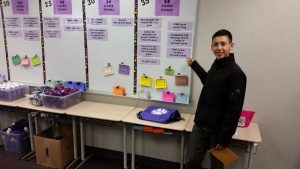 Most students appreciate it when teachers and others compliment their behavior, whether that’s quietly completing an assignment in class, showing respect for others or even helping to clean up the campus by picking up litter at lunchtime.

But back up those positive verbal strokes with a tangible reward and watch those many of those same students ramp up their good behavior.

That’s the thrust behind a new effort launched this year at two campuses in the Denair Unified School District. It’s called Positive Behavioral Interventions and Supports, and it’s intended to enhance student success and reduce discipline problems by proactively focusing schoolwide attention on what children are doing right.

Teachers and staff at Denair Middle School and Denair Elementary Charter Academy spent much of the 2015-16 school year identifying the standards that would be expected of every student on their campuses. Employees went through extensive training, in part to ensure consistency in what behaviors would be recognized and rewarded.

“Each school will be different because each builds their program from the ground up,” said DMS Principal Kelly Beard.

At DMS, that evolved into what is called PAWS – an acronym that reflects youngsters who have a “positive” attitude, “act” responsibly, make “wise” decisions and “show respect.” PAWS print coupons are handed out by all staff members when they see students displaying those traits. When students collect at least five PAWS prints, they can redeem them for a range of prizes of different values – pencils, notebooks, extensions on homework assignments, passes on PE warmup laps, lunch with teachers. The big reward – worth 35 PAWS prints — is a half-hour with a friend in the “VIP room” playing video games, ping pong, foosball, indoor basketball and other games. END_OF_DOCUMENT_TOKEN_TO_BE_REPLACED