END_OF_DOCUMENT_TOKEN_TO_BE_REPLACED

Denair High FFA students had a very successful showing at the recent Stanislaus County Fair in Turlock. The fair is the annual culmination of many months of work getting animals ready to show or completing projects.

Here are the results:

Everyone with a market animal made weight and grade, meaning they sold at the junior livestock auction.  Here are the rest of the Denair FFA students who participated in the fair: 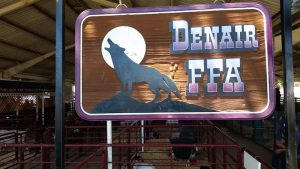 The Stanislaus County Fair opened Friday, but the preparations by 28 Denair High School FFA students began much, much earlier. Animals were bought and trained, and metal and wood projects were designed and crafted.

And even before fair officials swung open their gates for the 105th time, some of the Denair contingent already had collected ribbons.

Because there is not enough space in the crowded livestock areas, judging of goats, sheep, cows and other animals began as early as July 6.

Markus Rocha was second in advanced showmanship with his goat, qualifying him for the master showmanship finals. He also had the Reserve Junior Buck and make it to the FFA Market Goat Champion Drive with his entry. 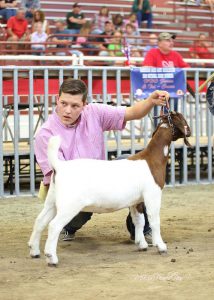 Rocha also was among a high-achieving group of Coyotes who excelled in projects. His barrel barbecue won a blue ribbon, as did an impressive 12-foot barbecue on a trailer that Joey Freitas built for the Denair Lions Club. Beau Carli’s large orchard float was one of five Best in Show awards for ag mechanics. Other winners were Bryson Prock for his skillful refurbishment of an antique trailer and Galhano for his large entertainment center made of knotty alder. Abi Dirkse earned second place for her wooden potting table.

“For a small school, we are extremely competitive,” said ag teacher Matthew Marshall, who joined the Denair High staff just in time for the 2015 county fair.

This year, Marshall and fellow first-year ag teacher Madison Weigel had much more opportunity to interact with their students to help them imagine and then create their projects. In all, Denair’s FFA members totaled more than 50 entries to the fair, capping a year of renewed enthusiasm and new energy for the school’s ag program. END_OF_DOCUMENT_TOKEN_TO_BE_REPLACED 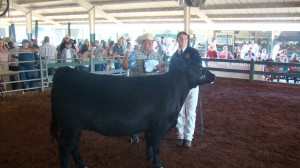 FFA Advisor, Mrs. Tannehill said, “It was amazing to see Denair on the FFA Jackets of so many students in the advanced rounds. To have four out of eight exhibitors in the advanced showmanship drive is an amazing feat, as well as having three out of five of the breed champions. All of the exhibitors put countless hours into their projects, and it was great to see everyone helping one another and cheering for each other.”