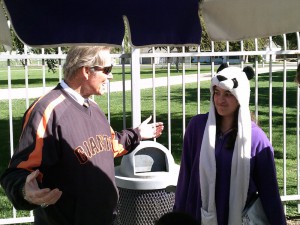 Tom Changnon, Stanislaus county superintendent of schools, used words like “amazing,” “excellent” and “terrific” to describe his hourlong tour. He popped in to classrooms at Denair High School and Denair Middle School as well as Denair Charter Academy, observing lessons and talking with students as well as teachers.

“Boy, am I impressed. There are a lot of good things happening out here,” said Changnon, who tries to visit each of the county’s 25 school districts every few years. He estimated it had been at least three years since his last trip to Denair, which is in the midst of a remarkable financial and academic recovery under new Superintendent Aaron Rosander.

“It’s night and day difference here now,”Changnon marveled. “The level of enthusiasm among the students and staff is obvious.”

Changnon was accompanied on his walking tour by Rosander as well as Aaron Delworth, the principal of the high school and middle school. Changnon generated plenty of reaction with his San Francisco Giants pullover and orange-and-black tie. A former minor league baseball pitcher, it was clear which team he’s pulling for in the World Series.

“Go Giants,” was a familiar response when Changnon entered science, history and social studies classes at the middle school or was spotted by high school students during their lunch period.

He interacted with sixth-graders learning about energy convection in the ocean and others studying Greek mythology. At Denair Charter Academy, he talked with Principal Michelle Bush as well as a student and staff involved in the very popular independent study program. He saw the high school band area and cafeteria, and was especially impressed by the four student-built floats that appeared in Friday’s homecoming parade.

“This is really something. Amazing,” Changnon said while art teacher John Stavrianoudakis explained how the projects came together.

Changnon listened intently as Rosander and Delworth described plans to form partnerships with nearby California State University, Stanislaus, to bring in professors to lecture about science and language arts or offer advanced placement and college-level classes to Denair students.

“That’s excellent,” said Changnon. “You get a really good feeling walking around this campus. These are good kids. They’re open, they’re friendly, they shake your hand. Denair is such a nice place. The people who live here have a lot to be proud of with this school district.”