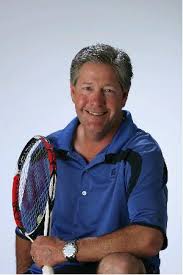 Bill Weber teaches tennis. To children as young as 3 and seniors as old as 88. To players who have never gripped a racquet all the way to tournament competitors. His office can be a city park, a private club or, this spring, the purple courts at Denair High School.

He is a tennis lifer. He’s been teaching the sport for 30 years and, at age 57, can’t imagine doing anything else.

Recently, he was named the 2014 Independent Teaching Professional of the Year by the U.S. Professional Teaching Association, an international organization with more than 13,000 members. He was singled out as the best in Northern California, a region that stretches from Fresno to the Oregon border.

Weber consistently has earned praise for his innovative teaching techniques, especially with children. He uses a method developed in Europe that uses smaller racquets, a shorter court, lower nets and modified balls to introduce kids to the game. As young players gradually get bigger and stronger, they move to the regular court.

He has worked with the U.S. Tennis Association on a program that integrates life skills and nutrition with instruction. He is one of the organizers of a NorCal team tennis league. He is a volunteer for junior programs. He currently is the director of tennis for Brenda Athletic Club in Turlock and teaches for city rec programs in Turlock, Oakdale, Atwater, Newman and Patterson.

What is Weber’s key message to his students?

“Have fun. If it’s not fun, you’re not going to want to do it, whether you’re a high-level player or a beginning player,” he said.

In Denair, Weber has worked previously with just two of the eight girls and seven boys on his team.

“We’re pretty green, but that doesn’t mean they can’t be competitive,” he said. “My hope for the season is to be undefeated in Southern League. We will have to overcome Ripon Christian, but I think we can.”

Denair’s players have spent the past few weeks doing conditioning drills and building camaraderie, Weber said. Challenge matches to determine singles and doubles pairings are next.

“I think we have a great group of kids. They seem to get along and have fun. Fun is the most important outcome of our game and I believe they have a good start,” he said.

That simple philosophy is at the heart of Weber’s ability to effectively teach the game to players of all ages and ability levels. It has been a constant in a long and successful career.

And while thrilled with his recent USPTA award, Weber modestly said the highlight of the ceremony at Stanford was introducing his former Modesto Junior College coach, Jack Bracken, the recipient of the USPTA’s Lifetime Achievement Award.

“He was a huge influence on me,” Weber said.