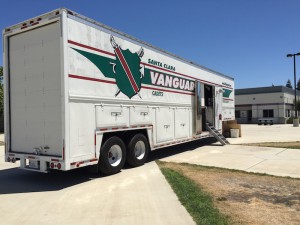 Class may be out for the summer, but the staccato beat of drums, the blare of horns and an array of colorful flags are filling the air around two Denair campuses this week.

The Vanguard Cadets Drum and Bugle Corps from Santa Clara once again are using the grassy fields and other facilities in Denair to prepare for the summer competition season. It is the sixth consecutive year the 150-member organization has held a weeklong camp at the adjoining high school and middle school sites.

“The relationship between Denair and Vanguard has been positive and has generated interest to the degree that folks will stop by to watch and inquire,” said Aaron Rosander, superintendent of the Denair Unified School District.

Two years ago, the camp provided a springboard to the Drum Corps International Open Class Championship, which the Bay Area group won for the second time.

“The Vanguard Cadets are honored to once again spend time here in Denair. We have always been treated so wonderfully and want to give much thanks to the district office personnel and school administration,” said Steve Barnhill, the corps’ director.

The connection to Denair was established by Vanguard’s CEO a few years ago, Barnhill said, and has worked out perfectly.

Vanguard’s group includes about 65 musicians in the brass section, 40 each in percussion and the color guard, two drum majors and about 20 adult instructors. The caravan of three buses, a semi-trailer full of instruments, flags, uniforms and equipment, and a mobile kitchen arrived Friday.

The cadets bunk in the middle school gym while the adults use various classrooms. “We all have air mattresses,” Barnhill said. “You get used to it.”

“The fun is how great we get it (the performance). The fun is chasing perfection. This is all work,” Barnhill said with a chuckle. “They’ll have four days off next week when we aren’t rehearsing.”

The musicians and color guard represent an all-star team from the Bay Area. For those who haven’t attended a performance, think of the halftime show at a football game – only better.

“You’re going to see very sophisticated program of marching and music. The skills displayed by the students are highly advanced,” Barnhill explained. “They’re like a professional marching band.”

The cadets will put on a dress rehearsal Thursday at Denair High beginning at 7 p.m. The public is invited to attend free of charge.

Cadets range in age from 15 to 21 years old; most are still in high school. Many go on to perform with the elite Vanguard Drum and Bugle Corps, a six-time world champion whose members are mostly in college.

The cadets have a busy weekend of competition with an event Friday in Clovis and other shows in Sacramento and Stanford. There are more events in the Bay Area and Southern California scheduled in July before a series of competitions in the Midwest. They will try to defend their national title Aug. 3-8 in Indianapolis. 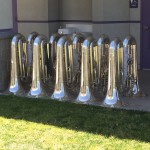 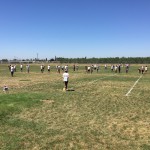 9 thoughts on “Vanguard Polishes Performance During Weeklong Camp in Denair”