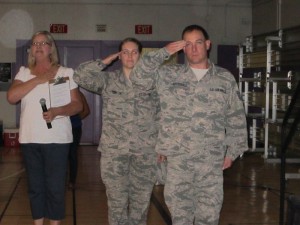 The last time Airman First Class Hannah Pointon appeared at an elementary assembly in Denair, she was the guest of honor as the perfect Christmas present for her parents, who didn’t know she was coming and cried tears of joy in an emotional reunion.

Friday morning, Pointon returned to the campus she once attended. This time, there were no surprises. And she brought along a colleague, Air Force Tech Sgt. Brad MacDonald.

The visit continued Pointon’s relationship with Denair Elementary Charter Academy teacher Patti Morrissey, who taught Pointon in fourth grade about 15 years ago. Then, Pointon and her classmates “adopted” some U.S. military personnel, sending cards and letters. After Pointon joined the Air Force a few years ago, Morrissey’s classes chose to adopt Pointon, who grew up in Denair. Her parents, Jody and Roger Jorge, still live here.

Pointon hadn’t been to Denair since Christmas. She and MacDonald, who both are cardiopulmonary technicians, are stationed at Nellis Air Force Base near Las Vegas. They drove eight hours Sunday to California and are staying with the Jorges at their home.

Friday, wearing their Air Force fatigues, they were the featured guests at an 8 a.m. assembly for more than 500 DECA elementary students. MacDonald, in a booming voice, led the Pledge of Allegiance. And he and Pointon proudly joined with the youngsters to sing the “Star Spangled Banner.”

Seeing the awe in the students’ eyes “makes you walk a little taller,” the soft-spoken Pointon admitted.

“They are the reason we do what we do,” MacDonald said.

Afterward, they took cookies decorated with the Air Force logo to Morrissey’s class and briefly shared their backgrounds with her fifth-graders.

“Basically, I’m a medic,” MacDonald said. “I work in a hospital. I try to go out of my way to help people.”

He also stressed the importance of education, telling the youngsters, “I’ve been in school my whole life. I don’t think I’ll ever stop learning.”

Pointon told the students that “I was you guys. I was born and raised here. My mom worked here (in the district). When I was your age, I got to write to soldiers, too.”

Morrissey promised that her students will write at least once a month and include photos so Pointon and MacDonald can put faces with their names. There will be special cards and letters timed to Thanksgiving and Christmas, the teacher promised.

Where those items will be sent is a secret. Pointon and MacDonald are poised to begin a two-year deployment overseas by the end of the year. They can’t say the precise location, only that “it is someplace cold,” according to MacDonald.

As a 14-year veteran, MacDonald already has seen a good chunk of the world. He has served three tours in the Middle East, including Iraq, as well as the Pacific and at a military base in Germany.

For Pointon, it will be her first time out of country. “I’ve never lived anyplace where it snows.”

MacDonald, who grew up near Ann Arbor, Mich., and is used to frigid winters, promised to loan her some cold-weather gear.

Meanwhile, with a long Labor Day weekend to enjoy and no need to return to base until Monday, Pointon was trying to figure out what part of California to show MacDonald. The only time he’s been to the state previously was to do some training years ago near San Luis Obispo.

The choices? He wanted to see giant redwood trees, so she was thinking of Muir Woods National Park in Marin County. Or Monterey, one of her favorite destinations. Or San Francisco, Sacramento or Yosemite.

Too many places and not nearly enough days.

“I’m not sure. I’m still thinking about it,” Pointon said with a smile after leaving Morrissey’s class.

“Wherever it is, the first thing I’m doing is taking this uniform off,” MacDonald said.

One thing is for certain, wherever they go, Pointon and MacDonald will have 500 youngsters wishing them save travels.