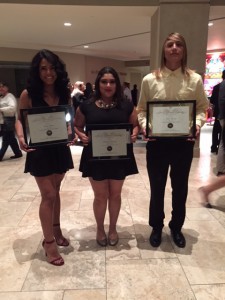 Seniors Anry Fuentes, Rosalinda Martinez and Juan de la Cruz and junior Hector Obando were awarded the coveted Seal of Multilingual Proficiency in a ceremony Wednesday night at the Gallo Center for the Arts in Modesto. The designation will be specially noted on their high school diplomas, certifying that they are fluent in English as well as Spanish.

“This is a verification of their skills,” said Maria Olivas, a Spanish teacher at Denair High who also serves on the language committee run by the Stanislaus County Office of Education.

This year, 544 juniors and seniors from nine Stanislaus County school districts applied for the Seal of Multilingual Proficiency. Of that group, 231 were certified as meeting the bilingual standards, according to a release from the County Office of Education. A dozen different languages were represented.

Olivas said 15 Denair students applied for the program with Fuentes, Martinez, Obando and de la Cruz emerging as winners. All have taken advanced Spanish classes at the high school.

“Learning a language at home is an advantage, but if they don’t have training in class, they probably won’t pass the tests,” Olivas said. “They may lack sentence structure or grammar.”

Denair has had 12 other students earn Multi-Lingual Seal recognition in the four years of the program. Seven of them currently attend college, Olivas said, and another is a senior at Denair High.