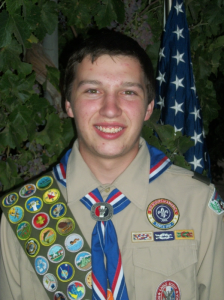 Congratulations to Everett “Scott” Evans, who recently became an Eagle Scout, the most prestigious and highest ranking in Boy Scouting.

Among the requirements for an Eagle Scout is to complete a service project. Scott chose to renovate the playground at Denair Elementary School. Over the summer, he gathered some volunteers — family, friends and other Scouts — to make improvements for younger students.

It took them two weekends to sand and repaint the basketball, volleyball and tetherball poles that had rusted through the years.

Scott, 18, has been a Scout for 10 years. He began with Troop 28 sponsored by the Denair Lions Club, but moved to Turlock Troop 21 last year because of declining membership in the Denair troop. His other accomplishments include the Arrow of Light (the top rank for a Cub Scout) and serving as patrol leader, senior patrol leader and quartermaster.

He is the son of Cary and Kimberly Evans.