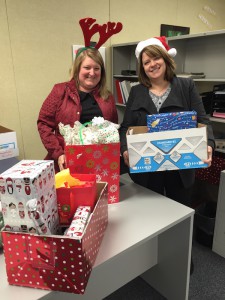 Like many workplaces, the staff at Denair Charter Academy often has organized potlucks and small gift exchanges during the holidays. But this year, the professional and emotional bond they share mentoring non-traditional students — many of whom arrive on campus from at-risk backgrounds – led to a different, more personal idea.

Teachers Suzzan Whitecloud and Sally Baker, along with first-year Principal Dawn Allen, imagined a way to positively impact some of their students’ lives outside of campus. They recognized that food, clothing, cooking utensils and other basic necessities often were in short supply. That some young children were without a single toy at Christmas. What if, they thought; we directed some time and money toward those students most in need?

The idea was a hit with the 20-member staff. Friday afternoon, four families were the grateful recipients of special deliveries from the DCA co-workers.

“It is very inspirational,” said Allen. “To work here, you have to be an empathetic person. The whole staff has been contributing.”

Even as they acknowledged that many of their 300 students are confronted daily with difficult financial and/or emotional circumstances, the staff at DCA knew they couldn’t help everyone. They narrowed down their list to these four families:

A year ago, Whitecloud quietly gave a Christmas jar to a student of hers from Delhi, who used the money to buy a nursing textbook. She’s now studying nursing at Modesto Junior College, Whitecloud said.

Allen realizes that many other companies and groups do extraordinary things to help the less fortunate during the holidays. Still, she beams when talking about her staff and the pride she feels in them. “I think it shows that our school cares and sends a message to our students and their families that somebody thought of them.”

Whitecloud has worked in a variety of settings during her career – from state prisons to other schools – and said she’s “never found a nicer staff.”

“To do this job, I have to understand where the kids are coming from and have empathy,” she said. “You can’t tell them to pull up their bootstraps when they don’t have boots.”