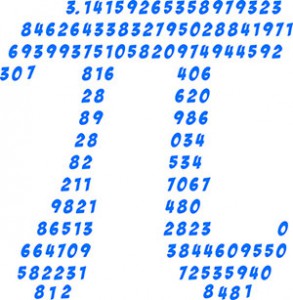 The answer to, “May I have some pie, please?” took different forms Monday at a noontime rally at Denair Middle School.

For custodian and math whiz Charlie Asbill – and some impressive Denair students – the appropriate response was to recite dozens or even hundreds of the numbers in the sequence of Pi. That begins with 3.14 – making March 14 officially “Pi Day” around the world each year.

For Principal Travis Manley and teachers Linda Richardson, David Rodriguez and Jasmin Perez, the question led to a comical conclusion in front of 270 students and many staff. Cream pies to their faces delivered by pupils were their reward for being good sports.

For the uninitiated, Pi Day commemorates the most recognizable mathematical constant in the world. Pi (π) is the ratio of any circle’s circumference to its diameter. Its value is approximately equal to 3.14159265. It is special because its decimal representation never ends or repeats.

Middle school math teacher Roseanne Cantwell was the impetus behind Monday’s rally. Her leadership group – wearing Pi T-shirts – opened with a modified version of the rock ’n roll classic “American Pie.” Then, one by one, six students took the stage to recite as many numbers in the Pi sequence as they could.

Sixth-grader Allie Williams was first and she quickly got the attention of a hushed audience. With peers in the first row keeping track of her accuracy, she ripped off nearly 200 numbers before pausing. Just when everyone thought she might stop, she began where she left off. Ten minutes later, after a few more starts and stops, she was done, having recited 447 decimal places of Pi.

Then it was Asbill’s turn. Two years ago, with only a month or so of practice, he learned the first 400 numbers of Pi, reciting them in front of a DMS math class. This time, with more time to prepare, his goal was 21 lines – 820 numbers.https://youtu.be/Edck7M3OBHQ

During the students’ performances, Asbill warmed up by snacking on blueberry-infused tortilla chips. He favors blueberries and other foods high in antioxidants for their positive effect on his blood sugar level and brain power.

After being introduced by Cantwell, Asbill – sporting his own Pi T-shirt — took the microphone and began. With each 39-number line of Pi displayed behind him so the audience could follow along, Asbill quickly began a cadence that averages about 7½ seconds per line.

Sometimes he announced a highlight of a line before he recited it (“This one starts like my old zip code” or “this one has a lot of 9’s in it”). Often, he finished with a slower enunciation of the last two or three digits. He didn’t like that he paused in the middle of line 12, so he repeated it.

By the time he was done, students, staff and others were shaking their heads in amazement. “How could anyone remember so many numbers?” they collectively wondered while giving him a thunderous ovation.

Asbill said he hasn’t practiced much the past two weeks because “the numbers were cemented in my head.” He equated it to an Olympic athlete who stops hard training many days ahead of an event, hoping to conserve maximum strength in muscles. Or, in this case, Asbill’s brain.

Still, he admitted performing in front of so many people gave him butterflies.

“It’s certainly different with a crowd like that,” he said with smile. “But I enjoyed it.”