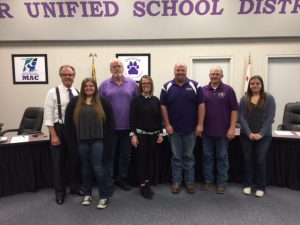 Denair High School senior Alexis Brantley recently received a prestigious honor from Congressman Jeff Denham. Brantley was one of several students in Denham’s 10th District to be given a Merit Award, which includes a letter of recommendation from Denham that Brantley can include as part of her college applications.

“I had no idea I had been nominated,” said Brantley. “I got a letter in the mail and then they called me into the office to make sure I had received it and to congratulate me.”

“She is an academic scholar and has great grades,” Backman praised. “She’s a leader. She’s a self-starter. She holds herself and others to high standards. She’s just one of those students that others look up to.”

According to Denham’s website, awards are based on academic achievement, leadership, involvement in extracurricular activities, school citizenship, volunteerism and community service.

“These students’ demonstration of leadership, scholastic excellence, and commitment to our community is inspiring,” Denham said. “It is an honor to present this group of young leaders with the Congressional Merit Award and I look forward to seeing their great accomplishments in the future.”

Brantley carries a 3.5 grade-point average in her college prep course load. She is the student body president at Denair High, plays clarinet in the band, will appear in the Drama Club’s upcoming production of “12 Angry Jurors” and will play on the softball team in the spring.

In the past, she has been active in the academic decathlon, yearbook and other student leadership positions.

Brantley joined the other medal recipients at a ceremony with Denham on Oct. 17 in Modesto. In addition to the letter of recommendation, she received a medal and a certificate from the congressman. Accompanying her were her grandmother and guardian, Susan Gilbert, and Denair Unified Superintendent Aaron Rosander.

“We are so proud of Alexis and happy for her,” Rosander said. “She is a terrific representative for Denair High School and our district.”

Brantley intends to apply soon to colleges. In particular, she has her eye on the nursing program at Sonora State University.

“My end goal is to become a traveling nurse,” she said. “That’s someone who goes to different emergency rooms and hospitals; generally, just a few weeks at a time. They go around the country and sometimes work on cruise ships. It’s something that appeals to me.”