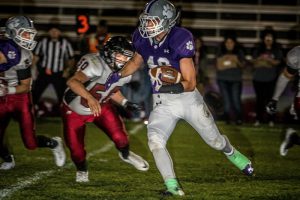 Justin Steeley, the heart and soul of a determined Denair High football team that succeeded despite limited numbers, was selected as the co-Most Valuable Player of the Southern League in voting by the league’s coaches.

Also honored were Joe Brasil, chosen as lineman of the year for his play on offense and defense, as well as defensive back Brendan Curnow.

Steeley is a senior who excelled at running back and linebacker. He scored 17 touchdowns and was the emotional leader all season for the Coyotes (6-5), who reached the Division VI playoffs before losing to eventual Sac-Joaquin Section champion Amador. For much of the season, Denair had no more than 15 players on its varsity roster.

Brasil, a senior, was a force on both sides of the ball. At 5-foot-9 and 230 pounds, he was the Coyotes’ strongest player and the one they often ran behind on offense and counted on to make a big play on defense.

Big plays were Curnow’s specialty. The senior scored six touchdowns as a running back against Le Grand and spearheaded the Coyotes’ ball-hawking secondary with hard hits and interceptions, including three against Ripon Christian.

The awards were announced Saturday night by head coach Anthony Armas at the Coyotes’ football banquet.