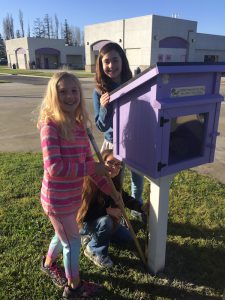 There’s nothing like a book to open a child’s mind. No matter the age, a picture book, a fairy tale or a more modern story can spark a lifelong joy for reading and learning.

The children at Denair Elementary Charter Academy – and the larger Denair community – now have one more source for books.

Two weeks ago, a Little Free Library was installed on the DECA campus. As its name suggests, there is no cost for students of all ages to borrow a book from the library, return it when they’re done and even donate gently used titles from their own homes.

The Little Free Library program is a national movement that has grown in popularity in the past few years. DECA’s library is one of more than 30 in Stanislaus County.

The library was donated to the campus by Becky and Eric Julien, two retired teachers who live in Turlock but have strong connections with Denair. Becky taught for many years at Denair Elementary School and later at the Denair Academic Avenues charter school. Eric was a science instructor for 37 years at Turlock High School.

The Juliens live not far from and are close friends with DECA fifth-grade teacher and leadership adviser Brenda Ranes. When she mentioned the possibility of adding a Little Free Library to the DECA campus, the Juliens jumped at the chance.

They ordered a library kit online for $460 that included all the materials for the structure, plus $100 worth of books. It has two shelves, a Plexiglas door and shingles to help make it weatherproof. The library was pre-painted lavender, the closest color to Denair purple the Juliens could find.

“I brought a power drill, hammer and the kit,” he said. “I don’t think any of the kids had used a power drill or hammer before. … It was a ton of fun. They traded using the safety glasses and took turns helping. The holes were pre-drilled. When they squeezed the trigger on the drill, I was afraid they were going to drill right through the wood.”

On March 27, the library was installed on a little round patch of grass next to a large tree in the center of the DECA bus turn-around, a place the students refer to as the “little island,” Ranes said.

To drum up interest and awareness, student council members went class-to-class to let their peers know about the library and explain the proper procedures for using it. The Little Free Library compliments the regular library on the DECA campus, which each class has weekly access to.

Already, it’s proven to be a hit. “I often see students using it throughout the day,” Ranes said. “At first the books kept disappearing, so more were put in.”

It also will be available to the public.

Julien said there is plenty of variety among the books that came with the kit; some even have CDs inside. He’s hopeful that the parents club as well as other community members will consider donating books to keep the Little Free Library stocked.

He’s especially proud of the ownership the girls on the student council took with the project.

“They said it’s their legacy,” Julien said. “They said they hope their children can use it someday. Isn’t that something?” 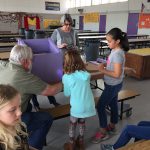 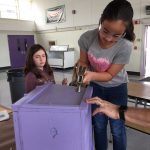