The Denair High School Class of 2017 provided real-life inspiration to their much younger peers Thursday morning, donning their purple and white caps and gowns and marching through the Denair Elementary Charter Academy campus.

It was the first step in a daylong series of events, including a mid-morning graduation practice walkthrough, leading up to Friday night’s commencement ceremony. Graduation begins at 7:30 p.m. at Jack Lytton Stadium.

Thursday’s first-ever Grad Walk was the brainchild of high school Principal Kara Backman and Amanda Silva, the district’s assistant director of special education. It was patterned after similar events discussed at a No Excuses University conference in January, Silva said.

NEU is an educational model built around the belief that every child has a right to be prepared for college, starting at the elementary level. Denair schools have embraced that philosophy and are working toward NEU certification.

Beneath their robes Thursday morning, Class of 2017 students wore T-shirts from their colleges of choice. Backman said 47 of the 70 graduates plan to attend a college or trade school of some kind.

The march to DECA campus was intended to be a vivid reminder of the educational journey the elementary students have just begun.

“We want to inspire families and have the younger children see their older brothers, sisters and cousins graduate, and to see that college is attainable,” Backman said.

As the Class of 2017 students strode across the grass and pavement and hallways at DECA, “Pomp and Circumstance” played over the loudspeaker. The elementary students clapped and cheered. Teachers and parents used cell phones to take photos and video.

The procession culminated on the sidewalk near the DECA gym, when the graduates formed a human tunnel. The younger kids filed through one-by-one, many squealing with delight.

“That was so cool,” said one little girl. 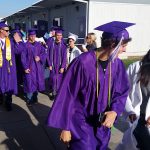 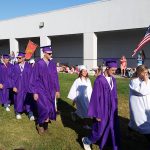 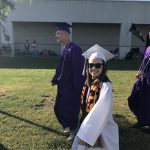 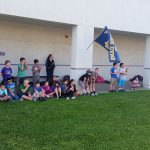 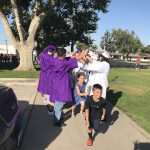 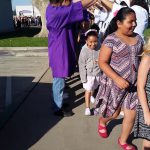 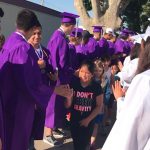