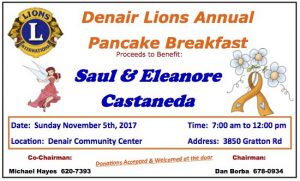 Every year, for over 40 years, the Denair Lions Club has held a pancake breakfast on the first Sunday in November.  The breakfast has become not only a great fundraiser, but annual social event for 400 to 600 supporters.  Every year, the club looks for a person or cause to donate the breakfast proceeds to.  In past years, it has paid for such things as new uniforms and equipment for the Denair Lions Youth Football league, updates and fixes to the Denair High School sport facilities and programs, and usually to local residents in need of financial aid for medical bills after or during a tragedy.  This year is no different.  On Sunday November 5, 2017, the Denair Community Center will open its doors at 7:00 am, for the Lions Annual Pancake Breakfast.  This year proceeds will be donated to Saul and Eleanore Casteneda.  Eleanore was diagnosed with acute lyphobalastic leukemia on March 8th. She began chemotherapy treatment the following day, due to the severity of the cancer.

Eleanore, who is 66 years old, is a caring and selfless caregiver to many.  She has devoted her life to taking care of those who needed support, when others couldn’t.  She worked for over 25 years as a non-emergency medical transport driver up until her mother began suffering from the effects of dementia and Alzheimer’s disease, 8 years ago.  In addition to taking care of her 90 year old mother, Aurelia Garcia, who is bedridden, Eleanore has been taking care of her brother-in-law for 25 years, who is battling mental issues.  According to her youngest daughter, Serena Mendoza, Eleanore would also take care of other family members such as her nieces and nephews during the summer, who were in need of a “boot camp”.  She lives with her husband Saul on a small ranchette, in Modesto, where they have various small animals, which makes it ideal to teach responsibility.  Eleanore had one of her nieces stay with her for 8 years during her troubled youth, helping her to get back on the right path.

Eleanore has been battling several infections, which have made her leukemia treatment almost impossible.  It has been a difficult battle finding a compatible donor for either a blood stem cell transfusion or a bone marrow transplant.  Immediate family members are usually the best matches.  Before he could be tested, Eleanore’s oldest brother Ralph passed away unexpectedly, while she was in the hospital.  Her grandson, Saul, was the next best donor match until her blood began rejecting the normal blood transfusions she was getting to maintain her white blood cell count.  She was scheduled to have a blood stem cell transfusion on October 5th, but it had to be postponed due to numerous infections.  Family members are constantly being tested to try to find a suitable match.  Eleanore’s son, Nick, is currently the best hope with a 33% chance of success.  As soon as she is healthy, she will begin the transfusion process and they will know if it is successful with 24 to 48 hours.  If not, she will then need a bone marrow transplant from her brother Nick.  She will also begin chemotherapy again as part of the treatment.

The Denair Lions Club reached out to her daughter Serena upon hearing of the family’s situation to help with the extensive travel and hotel bills they have acquired since March.  Eleanore’s leukemia has required her to travel to Sacramento every other day, since early March, to monitor and treat her infections.  After the transfusion and/or transplant, Eleanore will need to stay no more than 20 minutes from Sutter Hospital, in Sacramento, for 100 days.  It will more than likely be in a hotel, that will need to be sterile, to reduce the chance of infection due her weaken immune system.  None of these expenses are covered by medical insurance.

Donations can be made to the Denair Lions, PO Box 32, Denair CA, 95316.  As always, the pancake breakfast is a Donation Only event, at the doors.  No tickets are necessary.  There will be a few raffle prizes and the traditional Quilt Raffle, that has been handmade by a member’s mother, for over 15 years.