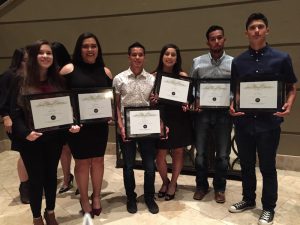 Seniors Natalie Soto, Oscar Garcia, Alex Flores, Litzy de la Cruz and Daisy Lopez; junior Analdo Moreno; and sophomore Elvis Silva were awarded the coveted Seal of Multilingual Proficiency in a ceremony Nov. 1 at the Gallo Center for the Arts in Modesto. The designation will be specially noted on their high school diplomas, certifying that they are fluent in English as well as Spanish.

“This is a verification of their skills,” said Maria Olivas, a Spanish teacher and coordinator of the English Language Development programs in the Denair district. She also serves on the language committee run by the Stanislaus County Office of Education.

This year, about 1,000 students from more than a dozen Stanislaus County high schools applied for the Seal of Multilingual Proficiency. Of that group, 260 were certified as meeting the bilingual standards, according to the County Office of Education. More than 20 different languages were represented.

In the five years of the Multi-Lingual Seal recognition program, 23 Denair students have been awarded certificates.