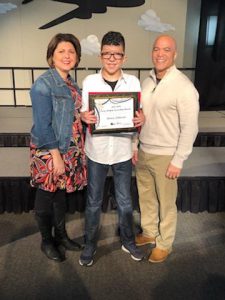 Henry Johnson has been overcoming obstacles, knocking down barriers and inspiring those around for all of his 16 years.

Now, the Denair High School sophomore has been recognized as part of a countywide program honoring students who have succeeded against all odds, beyond expectations or simply won the hearts of the administrators and other educators who helped them achieve their goals.

Tuesday morning, Henry was among 23 Stanislaus County students from 14 districts to receive an Every Student Succeeding Award at a breakfast in downtown Modesto.

Henry was born with Apert Syndrome, a genetic defect that falls under the broad classification of craniofacial/ anomalies and is primarily characterized by specific malformations of the skull, midface, hands, and feet. His skull was prematurely fused and unable to grow normally, and his fingers and toes were fused together in varying degrees.

He has undergone more than 20 surgeries to separate his fingers and toes, reform his skull and restructure his face. His most recent was early this year at UC Davis to realign his eyes.

Through it all, Henry has maintained a positive attitude about school and life. He is popular with his classmates and a favorite of his teachers. From 2008 to 2011, he and his family raised more than $90,000 for cranial research through a series of Henry’s March fun runs at CSU Stanislaus.

“Henry is an amazing kid,” said Denair Principal Kara Backman, who nominated him for the award. “He is the true definition of a young man that exudes grit, perseverance, and kindness.”

Henry’s mother, Rachel, is a teacher at Eisenhut Elementary School in Modesto. She appreciates the dedication that everyone in the Denair district has given Henry since he was a kindergartner. She also credits Henry’s peers for always welcoming him back to school despite multiple surgeries that often change his appearance.

“He loves school,” she said. “The teachers have built these great relationships around him. … There was never a time when he transitioning from one teacher to another when the teacher who was letting go didn’t cry.”

In her nomination form, Backman wrote that there was a concern when Henry began high school last year that he would be able “to learn at a high level, engage with like peers and be able to live the full high school experience while participating in extracurricular activities.”

“Apparently, the adults were the only ones worried,” Backman said, “because Henry hit the ground running and hasn’t looked back.”

Henry already had a strong bond with Robert Moore, his special education teacher. When Henry was in elementary school, Moore was one of his favorite after-school play group instructors. Now, Moore has Henry for math and reading, and accompanies him to a mainstreamed biology class.

“He really likes Mr. Moore,” Rachel Johnson said. “They talk about ‘Guardians of the Galaxy’ movies and sports. He’s known Henry since was a little kid.”

Henry loves to build things, his mother said, so when he chose ag mechanics as one of his electives this year, Moore worked with ag teacher John Hultgren to make it happen. The class includes welding, plumbing, electricity, and woodworking, all difficult tasks for those such as Henry with hand anomalies and fusions.

“Mr. Moore began working with Mr. Hultgren on how to get unique welding gloves made to fit Henry’s hands, enabling him to complete projects and weld at a high level,” Backman wrote. “A community member went out of their way to make these special gloves for Henry.”

Many of Henry’s teachers say he is the hardest-working student they have ever taught. There is no better example than his contribution to the Coyote Cups of Kindness Coffee Cart, a project between six special education students and para-professional Destiny Silva. The students serve coffee and specialty drinks on campus each day as well as at special events. It is a way to teach them important job and social skills that will allow them to enter the workforce after graduation.

Silva admits that she initially was nervous that Henry would be able to hold an empty coffee cup while simultaneously steaming milk and pouring espresso shots. Once again, Henry proved her wrong.

“He took it upon himself to find a way to make it work and now does it on his own,” Silva said. “Some of his hurdles have been very trying on him, but he always manages to figure out a way to get it done. Go Henry!”

She said Henry is a leader on the team and his “positive attitude seems to spread like waves when working with his peers.”

The Every Student Succeeding Award program is sponsored by the Association of California School Administrators, which believes every student deserves equal opportunities to succeed and reach their goals of academic excellence.

“Their success is our success; their powerful stories are our inspiration,” the ACSA website says.