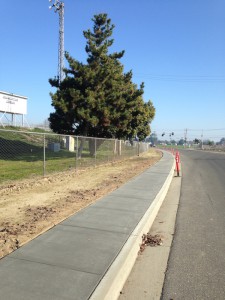 The first piece of a community beautification and pedestrian safety project at Denair’s western entrance was completed Tuesday with the pouring of 700 feet of concrete along Monte Vista Avenue.

Central Valley Concrete of Denair provided the materials and arranged for the labor on the project, which was a joint effort by the Denair Unified School District and Stanislaus County. Supervisor Vito Chiesa, who represents the Denair area, arranged for CVC to donate the concrete work. The school district will install the irrigation system, grass and shrubbery later this spring.

The new 5-foot-wide sidewalk is along the north side Monte Vista Avenue behind Jack W. Lytton Stadium. It connects with an existing walkway that ended at the intersection of Lester Road and Monte Vista. It will provide a safer route to and from school for students as well as users of the stadium, which hosts football games and other community events.

He said there will be a community fundraising effort to help pay for the landscaping and irrigation system, estimated to be about $5,000.