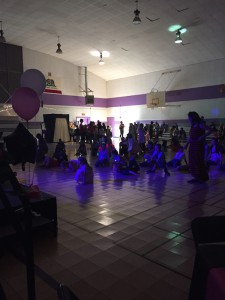 Even three days later, students, their families and staff members were buzzing about how much fun they had at Denair Elementary School’s first-ever dance event. Featuring “An Evening in Paris” theme, the May 1 event attracted more than 400 people to the school’s gym for three hours of Gaelic-inspired gaiety.

Many of the young boys donned nice shirts and ties, and the girls wore pretty pastel dresses. Their parents and older siblings also wore attire that would have been fashionable on the Champs de Elysees or at a restaurant overlooking the Seine River.

The gym was festively decorated with colored lights and small tables with miniature Eiffel Towers, transforming it into a faux Parisian nightclub.

The theme was chosen by the parents’ clubs that spearheaded and organized the dance, said Principal Sara Michelena.

“It was super cute and totally age appropriate,” she said, giving special thanks to parents Mary Prine, Kalee Lopes and Troy and Debbie Edwards for their hard work in making the night come to life.

Michelena estimated that two-thirds of the 300 families whose children attend the elementary school and adjacent Denair Academic Avenues participated in the party.

There was plenty of pizza and soft drinks, but the highlight clearly was the professional DJ and the dancing. He taught everyone how to line dance, the cha-cha slide and the chicken dance. And when he played “My Girl” by the Temptations, fathers danced with their daughters and mothers with their sons.

“It was best part of the night,” Michelena said.

She wasn’t alone in her praise, if Facebook comments are any indication.

“My boys had a blast,” said parent Angelina Chavez.

Caley Rutherford couldn’t attend, but said her husband, daughter and her friends “had a blast.”

Amanda Howry said she was “super proud of how our kids acted. They had a great time!”

Michelena said she’s already had parents suggest there needs to be an encore.

“We wanted to do something for the whole family,” she said. “I’ve had requests to do two dances next year – one in the beginning as a back-to-school event and another in the spring at the end of the school year.”