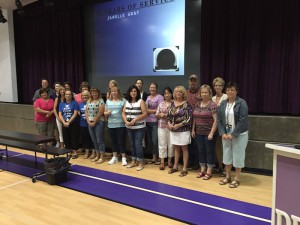 Classroom doors will swing open and Denair Unified School District students will return to class Wednesday at 8 a.m. to begin the 2015-16 school year. There have been some significant changes in the few short months since students and staff started their summer break.

A new elementary school, Denair Elementary Charter Academy, has been formed. It cleared its final administrative hurdle in July when it received approval from the State Department of Education. Already, it has generated widespread interest among parents. Enrollment has swelled to 510 students, about 35 more than at the end of the last school year.

There were plenty of smiles and hugs Tuesday morning as Superintendent Aaron Rosander welcomed teachers and staff members for a full day of training. Eighteen employees were honored for years of service ranging from 10 to 30 years for what Rosander called “the greatest profession on the planet.”

He thanked everyone in attendance for their commitment to making Denair “the best private schools in the county that are public” and said the increase in enrollment is an endorsement of the changes that have occurred.

“Parents and kids vote with their feet,” Rosander said. “They’re making a conscious choice to return to Denair. And some who have never been in our schools are signing transfer agreements.”

He said attracting elementary students who remain in the district through high school is the key to financial stability. “Enrollment is moving its way to middle school and high school. Over the next decade, the strategy is to raise enrollment across the district.  I believe we’re on the trajectory we wanted to be.”

Rosander equated successfully meeting the needs of students to the customer-focused culture created decades ago by Walt Disney.

“It’s a way to drive an organization to the highest levels of excellence, bring everybody with you and sustain it,” he said. “The journey we’re on is the journey of customer experience. It’s that relationship that drives excellence in organizations.” 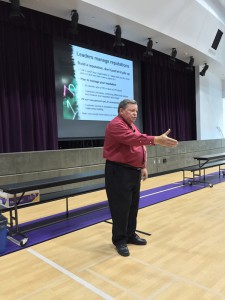 Educational consultant and communications expert Tom DeLapp challenged each member of the staff to bring a “passionate purpose” to work every day. He talked of creating student-centered schools where the focus is on “we” and not “me.”

“I’m here to tell you, if one of you fails, you all fail a little bit. You’re in this together, whether you like it or not,” said DeLapp, adding that all staff members have a responsibility to communicate effectively with each other as well as students, parents and community members.

“Don’t lose the opportunity to sell people on your schools. Not just you, but the whole thing,” he said. “You have to speak with one clear voice. When you do that, you’ll have impact.”

Nowhere has that voice resonated louder or the impacts become clearer than on the DECA campus.

The charter school features a first-ever-in-the-district Spanish immersion program for kindergartners. There are 32 students enrolled and Principal Sara Michelena already is planning ahead for expansion.

All other students also will have daily instruction in Spanish. DECA’s curriculum features traditional core subjects as well as music, fine arts and computer science. Emphasis is placed at an early age on the value of a college education.

Michelena and 20 of her teachers attended a conference in Indian Wells over the summer for No Excuses University, whose belief is that all students deserve the opportunity to be taught in a way that prepares them for college.

“It was amazing,” Michelena said. 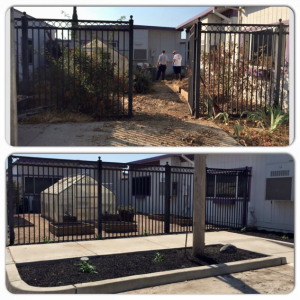 In recent weeks, her staff’s pride in their mission and campus manifested itself in a beautification project outside her office. A dilapidated greenhouse was transformed into a pretty garden area with the help of teachers, some family members and Denair employees. Bright purple paw marks were painted on the sidewalks to guide youngsters to classes.

“Everyone is very excited,” Michelena said. “We can’t wait to start.”