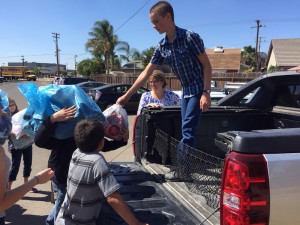 The Denair community as well as students at two campuses contributed in a big way to an impressive relief effort for people affected by the Butte fire in Calaveras and Amador counties.

Water and non-perishable food. Clothing, blankets and bedding. Toiletries, toothpaste and diapers. Toys and games. Pet food. Even 60 to 70 100-pound bales of hay for hungry horses.

It will take a small convoy of trucks, trailers, SUVs and other vehicles to transport it all Friday afternoon to various places in Calaveras County.

Since it began Sept. 9, the Butte fire has burned more than 71,000 acres, destroyed 365 homes and 261 outbuildings, and damaged 26 structures. Friday morning, Cal Fire estimated containment at about 60%.

The idea to help fire victims began Monday among students and staff at Denair High School and Denair Middle School.

At the high school, student Destiny Silva organized the effort. At the middle school, campus supervisor Melissa Oei – who used to live in Valley Springs, not far from the fire — has friends who have lost their homes. Students in the leadership club found out and decided they wanted to pitch in.

By midday Friday, donations were overflowing from the middle school library into the hallway outside Principal Travis Manley’s office. At the high school, cartons of water, boxes of food, piles of blankets and other items were stacked high in a vacant room across from Principal Alecia Myers’ office. 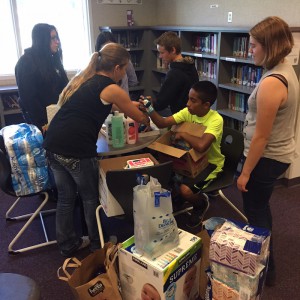 “The community has been great,” Manley said. “We’ve had people from Oakdale who graduated from Denair who saw what we were doing on the news and brought items to donate.

“We had a lady who is about to have back surgery who brought a truckload of six very heavy boxes. She said, ‘I can’t help you unload, but I want to donate.’ ”

Manley had a friendly competition among his middle school classrooms. The class that brought in the most donations got released five minutes early for lunch Friday – putting them at the head of the line for their favorite foods in the cafeteria.

Manley expected more than a dozen trucks and other vehicles to be needed when loading begins at 4 p.m. Friday at the middle school. He said some of the goods will be dropped off at a Red Cross relief station or Resource Connection in San Andreas. The three tons of hay and pet food will be driven via trailer to the Calaveras County Fairgrounds in Angels Camp, where many horses, dogs and cats are being kept.

On Monday, Silva and her family intend to take what is collected at the high school to one of the Red Cross relief stations in Calaveras County.

Superintendent Aaron Rosander said he was moved by the response on behalf of fire victims.

“It is a clear message of hope and help,” he said. “It’s inspiring. I couldn’t be more proud of our students and community.”