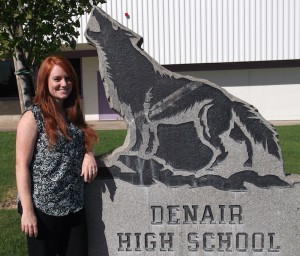 Cherie Gresham really enjoys being around high school students – these “little adults,” as she respectfully refers to them. But until she was hired as Denair High’s new counselor, she assumed most of her interaction with teens would be confined to the soccer field and her role as a coach.

Even while working for the state Department of Social Services the past few years, Gresham applied for school jobs in Merced, Los Banos and her hometown of Manteca. But most districts have reduced their counseling staffs in the past decade and the few opportunities that came open attracted many experienced applicants.

It took a tip over the summer from her former college roommate and CSU Stanislaus soccer teammate Breanna Vaughan – now a science teacher at Denair High — to create the break Gresham needed.

She applied in July and interviewed in August for the position, impressing Principal Alecia Myers and the others on the search committee. A few days later, Gresham got the call she had been waiting for. Her first day was Sept. 4 – three weeks after classes began.

“We are so excited to have her on board as she brings a wealth of experience serving students, parents and colleagues from her previous position as a social worker,” Myers said. “She comes to us with the highest of recommendations and is a self-starter who strives to seek the best way to serve others with an excitement and energy that makes you want to work with her. Her natural curiosity is infectious and has already begun creating energy in our students and staff.”

School counselors wear many hats and it’s no different for Gresham. She will play a key role in assuring all students are on track to graduate and those bound for college are in the right classes. She will advise students and their parents when it comes to college applications and applying for scholarships and grants. She will work with Myers to build class schedules that provide the most flexibility. And she will be in charge of state testing, student awards and recognition, and the career fair.

It’s a role Gresham long has aspired to. Even as she was commuting for years from her home in Turlock to her job in Stockton, she never gave up on her dream.

“I’ve always wanted to do something with people – to help people,” said Gresham. “And I’ve always loved this age group.”

Looking back, Gresham said her own counselor at Sierra High in Manteca was a strong influence on her career path, though Gresham didn’t need much guidance. She graduated near the top of her class and starred on the soccer team. But she turned down a soccer scholarship at Stanislaus State and instead enrolled at UC Irvine as a pre-med student. She wanted to be a pediatrician – she thought.

She changed her major from biology to sociology in her junior year and eventually transferred to Stanislaus in 2004. She resumed playing soccer – something she desperately missed – and pursued a new educational path.

“It was a great experience. A very positive change,” Gresham said of her return. “I was teammates with Bree. We were roommates and we’ve been friends ever since.”

While studying for her master’s degree in human services, Gresham took a course focused on the kind of job she has now. She was hooked. She interned at Orestimba and Waterford high schools, meeting important career mentors and reinforcing to her what she wanted to do.

But jobs were scarce. So, after college, she went to work for the state, married and had a daughter, kept coaching soccer and remained alert for just the right high school opening.

She believes she’s found it at Denair.

“I’ve always had a passion for this job,” Gresham said. “Even when I interviewed, I realized that this is what I want to do, even if I didn’t get this job. I’m so excited to her here and be able to advocate for the students.”

It didn’t take long for her to pick up on the achievement-based culture fostered by Superintendent Aaron Rosander and Myers, the high school’s first-year principal.

“We want the academic rigor to excel and show that we are providing an education that is equivalent to anyone,” Gresham said.