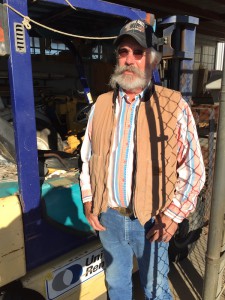 Like many families in Denair, the Loftins have deep roots in the community. Dennis Loftin – the facilities and maintenance director for the Denair Unified School District – graduated from the high school. So did his father, Glenn, who later became a teacher there, coached basketball and served as athletic director. So did Glenn Loftin’s mother.

Though there have been a few small gaps, it seems there has been a Loftin associated with the school for nearly 70 years, ever since both sides of Glenn Loftin’s family migrated to California from Kansas during the Dust Bowl.

That will end next week, when Dennis Loftin retires after 15 years.

“It’s time,” said Loftin, 56, who was an electrician by training before back and knee ailments inspired a move into school district facilities supervision, first in Riverbank and then at his hometown campuses.

The soft-spoken Loftin is a quickly recognized face all around the district, not only for his bushy gray mustache and beard but because he literally knows the story behind every building, classroom, piece of equipment or stretch of sidewalk.

As an All-American athlete in high school, he remembers when all the boys and girls – high school, middle school and elementary – shared the single gymnasium on the elementary campus. Same with the cafeteria.

It took more than 20 years for that dream to be realized. Loftin said he is proud to have worked with many other community members to help pass the school bond that provided the money to build a new high school gym. A few years later, residents voted in favor of a second school bond to construct a new middle school.

That commitment to education and first-class facilities is reflected today in Denair’s campuses, among the nicest of any small district in the region.

Loftin, who has been the man in charge of maintaining everything since 2000, says his philosophy is simple: “Use what you’ve got and make the most of it. It’s just common sense.”

He has seen his staff grow from seven full-time employees when he began to as many as 14. He supervises 11 people today. He’s had four different offices and has been a student under or worked for every superintendent since the mid-1960s.

“Mr. Loftin has provided our schools with many years of indispensable service,” said Superintendent Aaron Rosander. “We thank Dennis and wish him the very best in retirement.”

Loftin has no immediate short-term plans. There have plenty of calls already, people offering full- or part-time work as an electrician or handyman. He’s keeping them all at arm’s length, at least for now.

He had knee replacement surgery last spring and his leg feels much better now. His back still reminds him of the physical work he’s done much of his life. And he’s knows to avoid ladders.

He imagines working in his wood shop at home, continuing to turn wine barrels into chairs or cannery pallets into wine racks. He figures to have plenty of time “to piddle around.”

“I can build or fix almost anything,” he said modestly, before pausing. “But I can’t get up and down ladders anymore.”