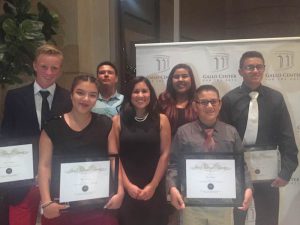 Senior Cesar Flores; juniors Yareli Coria, Alondra Montanez and Jesus Perez; sophomores Angela Verduzco and Reyna Villa; and freshmen Brigg Wenstrand and Jesus Flores were awarded the coveted Seal of Multilingual Proficiency in a ceremony Nov. 2 at the Gallo Center for the Arts in Modesto. The designation will be specially noted on their high school diplomas, certifying that they are fluent in English as well as Spanish.

“This is a verification of their skills,” said Maria Olivas, a former Spanish teacher and coordinator of the English Language Development programs in the Denair district. She also serves on the language committee run by the Stanislaus County Office of Education.

This year, about 1,100 students from 15 Stanislaus County high schools applied for the Seal of Multilingual Proficiency. Of that group, 303 were certified as meeting the bilingual standards, according to the County Office of Education. Twenty-three different languages were represented.

All the Denair students honored this year take advanced Spanish classes at the high school taught by Sandra Cisneros. In the five years of the Multi-Lingual Seal recognition program, 16 Denair students have been awarded certificates.

“As a teacher, I have been very fortunate to see that all the effort and dedication that the foreign language students have put into the multilingual seal assessment have been paid off with a grand acknowledgement and Seal diploma,” Cisneros said.

Added Olivas: “Learning a language at home is an advantage, but if they don’t have training in class, they probably won’t pass the tests.”