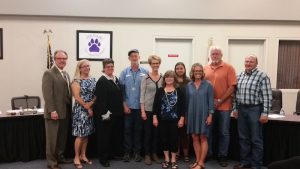 Five accomplished and influential teachers and a popular maintenance man have announced their retirements from the Denair Unified School District at the end of this month. Combined, they have 171 years of service in schools.

All were honored and presented with inscribed clocks Thursday night at an emotional Board of Trustees meeting. There were smiles, hugs and more than a few tears – of gratitude and happy memories, and from close friends who won’t be seen quite as frequently.

Superintendent Aaron Rosander referred to teaching as “a lifelong calling” as part of his tribute to the retirees. “I couldn’t be more proud to be associated with you. Thank you for all that you’ve done.”

The Pulse reached out to all six employees; four of them responded.

Patti Greer, 29½ years in the district (40 overall): Greer expects that she will miss her colleagues as well as the eager faces of her students.

“When you teach in a district as long as I have, you develop friendships that last a lifetime,” she said. “I might have a visit once in a while to get a kid fix.”

If Greer wants to drop in, she won’t have to go far. She lives next door to the middle school.

Retired teacher Becky Julien, who taught with Greer for many years, credited her with instilling important “life skills” to her pupils.

“I was privileged to learn from her,” Julien told the audience at the board meeting. “She stressed that each child to be their best self. Direct with students and parents. She instilled a strong sense of caring, community and citizenship.”

Asked about her retirement plans, Greer said, “Spending time with my family, enjoying more time with my grandson and traveling.

Carol Hammond, 38 years in the district: Hammond wore many hats during her long and very successful career – teacher, mentor, instructional coach, assistant superintendent, elementary school principal. She has been a fixture in the district long enough to teach multiple generations of the same family.

“It’s a wonderful feeling when they come back as a successful adult or parent,” she said.

Kathi Dunham-Filson, now president of the Board of Trustees, was a student teacher under Hammond 20 years ago.

“She’s one of the five people I’ll meet in heaven,” Dunham-Filson said during a tearful tribute. Turning to Hammond, she added: “Thank you. You touched lives and will continue to do that. You have a gift and a talent to teach.”

Hammond returned the compliment, calling Denair’s culture unique. “The people are why I have always stayed,” she said. “The teachers/staff/friends were always there when I needed someone or needed support. The caring staff from office to teachers to support staff is what has always made Denair a family.”

In retirement, Hammond expects to “sleep in for a month, then travel, ski midweek, work out when it’s not busy, read non-teacher books, and work at my RV/campground and whitewater rafting business.”

Mary Worman, 15 years in district (27 overall): Worman was hired when the Denair State Preschool opened its doors in January 2002 and has been part of the staff ever since.

“She makes young students’ first experience in the classroom a positive one,” praised fellow teacher Lenora Gomes. “Her knowledge of child development and her infectious laugh will be missed by everyone.”

Worman said one of her proudest moments came in May 2015, when the youngsters who were part of her first preschool class in Denair graduated from high school.

“It has been a privilege and an amazing delight to watch them grow from little seedlings into young adults,” she said of all her students.

Worman spent her entire career as a preschool instructor. She also home-schooled her own two children. “Teaching has definitely been my calling.”

She said that she will “miss the awesome people I work with” and the “school community here in Denair.” She described providing quality education for very young children as one of her favorite accomplishments.

Worman’s retirement likely will take her away from the Central Valley, closer to her two grandchildren in Arizona. She and her husband celebrate their 40th wedding anniversary in August.

“When he retires, he wants to build one more house to call home, either in Palm Springs or Scottsdale,” she said. “It seems as though the desert is destined to be our retirement home.”

Charlie Asbill, 15 years in the district: Many associate Asbill with his uncanny ability to recite the numbers in the most recognizable math constant in the world – Pi, or 3.14 — to 2,000 digits.

Last year, Asbill shared his special skill and challenged the middle school students to try to match him. The result was a fun assembly on “Pi Day” – March 14, of course – at which six students accurately rattled off the Pi sequence. One of them got as far as 447 decimal places.

During the students’ performances, Asbill warmed up by snacking on blueberry-infused tortilla chips. He favors organic blueberries and other foods high in antioxidants for their positive effect on his blood sugar level and brain power.

After being introduced, Asbill took the microphone and began. With each 39-number line of Pi displayed behind him so the audience could follow along, Asbill quickly began a cadence that averages about 7½ seconds per line.

Sometimes he announced a highlight of a line before he recited it (“This one starts like my old zip code” or “this one has a lot of 9’s in it”). Often, he finished with a slower enunciation of the last two or three digits. He didn’t like that he paused in the middle of line 12, so he repeated it.

By the time he was done, students, staff and others were shaking their heads in amazement.

At Thursday’s board meeting, Interim DMS Principal Brian LaFountain smiled as he ticked off Asbill’s many characteristics.

“He’s the first to make friends with new staff. His quirky stories and corny jokes endear him to everyone,” LaFountain said. “Charlie’s been cleaning DMS since it opened. He never complains. He has an incredible work ethic and an incredible sense of humor. He’s always willing to help. He’s a talented pianist.  Tell him your birthday and he’ll never forget. He hasn’t eaten sweets for 32 years.”

Asked his plans in retirement, Asbill said: “I’m really interested in fixing me and becoming more of an academic. … I really believe that it’s possible for neuro-regeneration.

And, he admitted, “It will be nice to get away from the routine.”