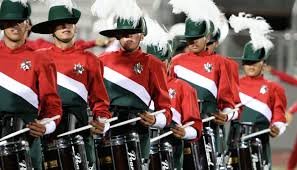 It’s about to get loud again at the Denair High School stadium and middle school facilities.

The Vanguard Cadets Drum and Bugle Corps of Santa Clara are back for the eighth year in a row. The 150-member organization of musicians and color guard participants traditionally begins each summer competition season with a weeklong camp in Denair.

“The relationship between Denair and Vanguard has been positive and has generated interest to the degree that folks will stop by to watch,” said Aaron Rosander, superintendent of the Denair Unified School District.

Twice in the past four years, the camp provided a springboard to the Drum Corps International Open Class Championship, which the Bay Area group has won four times (2000, 2008, 2013 and 2015). Santa Clara finished second last summer.

Vanguard’s group includes about 70 musicians in the brass section playing trumpets, mellophones, trombones and tubas; about 40 in the color guard waving flags, twirling rifles and dancing; about 35 in percussion playing snares, quads, xylophones and marimbas; three drum majors; and about 20 adult instructors. The caravan of three buses, a semi-trailer full of instruments, flags, uniforms and equipment, and a mobile kitchen will arrive on Thursday.

The cadets bunk in the middle school gym while the adults use various classrooms. “We all have air mattresses,” Barnhill said. “This gets our kids and our parental volunteers used to the idea of living out of a suitcase and sleeping on air mattresses. We couldn’t afford it otherwise. It’s not practical. Plus, we need the space a school provides to rehearse. We’re very self-sufficient.”

“We’re here to work. This is what they signed up for,” Barnhill explained. “We want to put a complete product out there.”

With temperatures forecast to near 100 degrees starting later this week, Barnhill said much of the physical activity will be restricted to the morning and evening. “We’ll talk about how to address the heat. We don’t want kids to be burned out. … We’ll make sure there’s plenty of water.”

The musicians and color guard represent an all-star team from the Bay Area. For those who haven’t attended a performance, think of the halftime show at a football game – only better. Every year, a new routine is created. This summer’s theme is “In Pieces,” which is “an intoxicating mixture of Spanish and Middle Eastern music,” according to Barnhill.

“It’s very passionate music. Very evocative and emotional, with a lot of jazz influences,” he said.

The cadets will put on a dress rehearsal Thursday, June 22 at Denair High beginning at 8 p.m. The public is invited to attend free of charge.

“This is the most talent I’ve had in my 12 years here,” Barnhill said. “The kids are very motivated. They’re having a great time and working very hard.”

Many of the musicians and color guard were part of a 200-member group that marched in the Tournament of Roses Parade in Pasadena earlier this year.

Cadets range in age from 14 to 21 years old; most are still in high school. Many go on to perform with the elite Vanguard Drum and Bugle Corps, a six-time world champion whose members are mostly in college.

The cadets have a busy weekend of competition with an event June 23 in Fresno, a 50th anniversary show in Santa Clara the next night and then a performance at Stanford. There are more events in the Bay Area and Southern California scheduled in July before a series of competitions in the Midwest. They will try to reclaim their national title Aug. 7-12 in Indianapolis.