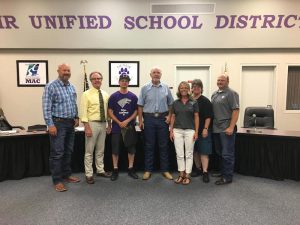 The Denair Unified School District is in growth mode again, a fact plainly reflected in the 2017-18 budget passed unanimously by trustees Thursday night.

The $16.2 million spending plan projects the use of more than $1 million in so-called “one-time funds” received from the state over the past few years. Most of that money will be directed to new buildings on the fast-growing Denair Elementary Charter Academy campus, new textbooks at all four campuses, and computers and other technology to better prepare those students.

The budget also reflects a $500,000 Clean Energy Grant received from the state. That money will pay for the energy-efficient lighting and a heating and air conditioning system installed this week at Denair Charter Academy. It also will fund new LED lighting at the Denair High gym and at about half the classrooms there and at Denair Middle School.

DECA must add two classes each year for students in the dual-immersion program, which teaches children in Spanish and English. It started at the kindergarten level in 2015-16 and expands to each grade level as the first students advance. Covello said about $415,000 will go toward purchase and installation of up to 10 portable classrooms at DECA in time for the 2018-19 school year.

The one-time funds have accumulated the past three years, Covello said. By law, they cannot be spent on ongoing expenses such as employee salaries.

Superintendent Aaron Rosander said rather than increasing overall funding for education, Gov. Jerry Brown prefers to give districts one-time funds. The budget Brown signed Tuesday includes an additional $3.1 billion in one-time funding for public education in California in the next school year.

Those funds are dependent on continued growth in the state economy, Covello said, and would not be available to school districts until May 2019.

State funding represents about 90% of the budget, Covello said. The remainder comes from the federal government (6%) and local sources (4%).

Rosander also said there is uncertainty about how President Donald Trump will change how the federal education bureaucracy interacts with public schools.

Denair’s budget anticipates an Average Daily Attendance of 1,283 students next year, an increase of 20 students from this year. ADA is the basis for state funding. Projections are for 2% attendance growth in 2018-19 and 3% in 2019-20.

The budget is about $2.2 million higher than the district will spend this year, Covello said. Other than the one-time funds and clean energy grant, the rest of the difference is reflected in raises given to employees and additional contributions by the district to their pension systems.

In addition to the budget, trustees also approved the Local Control Accountability Plan, which is “the narrative that explains how the money we spend is used to meet the district’s goals,” said Covello. Each district is required to submit an annual LCAP to the state.

Denair’s LCAP shows it has one of the lowest student suspension rates in California as well as one of the highest graduation rates for white students.

Its areas of greatest need, according to state metrics, are improving math and English test scores districtwide. The Latino graduation rate of 79.5% mirrors the state average and also is a target for improvement. A new program called Parents for Quality Education will be rolled out this year to educate parents in their native language about the importance of being a part of their child’s learning experiences.

In other action, trustees: