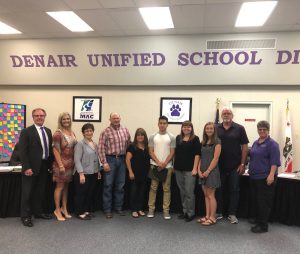 The Denair Unified School District didn’t have to look very far to find its next principal for Denair Middle School. Trustees voted unanimously Thursday night to hire Amanda Silva, who currently serves as the district’s assistant director of special education.

“She’s dedicated to Denair. She empowers others. She’s forward thinking. She’s passionate about kids,” said Kara Backman, the district’s director of secondary education and high school principal. She served on the hiring committee will be Silva’s direct supervisor.

Backman said Silva stood out among the seven internal and external candidates who were interviewed. Silva will become the middle school campus’ fifth principal in the past four years, a trend she intends to do her best to end.

“The biggest thing is building culture and pride in community, school and students,” she said. “We need to be positive, think positive and work hard.”

Silva has been with the district since February 2016 and has worked with staff and students across all four campuses to develop special education programs. She has a bachelor’s degree in psychology, and an administrative credential and master’s degree from College of San Joaquin.

Confronting a steady decline in enrollment will be among her first challenges, she said.

“We need to become a team,” said Silva, who believes the relationships she already has forged with the DMS staff will benefit her. “We’ll be focused on doing our best for all our students.”

Silva will replace Brian LaFountain, who will return to the classroom teaching high school math in Ceres.

In other action Thursday, trustees: