From 2002 to 2005, Vaughan was a force in the net for the Warriors. She was a three-time California Collegiate Athletic Association all-conference choice and still holds four school career records – shutouts (27.5), saves (319), victories (45) and minutes played (nearly 7,300). She has 11 single-season records, including most shutouts (10).

In 2005, she led the Warriors to their first-ever CCAA tournament appearance.

Last weekend, Vaughan’s stellar career was recognized again when she became the first women’s soccer player to be enshrined in the CSU Stanislaus Athletic Hall of Fame.

In her induction speech, she described the experience as “awesome” and thanked her parents, coaches and teammates.

“I feel so lucky. … I said that I still have nightmares about running, but even though I had to work super hard it was worth it and I loved every minute of it,” Vaughan said. “My picture is and forever will be in the gym foyer at CSUS.”

Vaughan graduated from CSU Stanislaus in 2008 with a degree in biological sciences. She spent five years teaching biology, environmental chemistry and health in high schools in Fresno, Visalia and Roseville before joining the Denair High staff last August.

For more on Vaughan and the six other 2015 inductees in the Warriors Hall of Fame, go to www.warriorathletics.com/HOF. 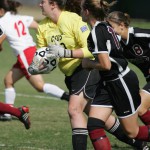 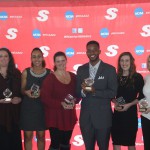 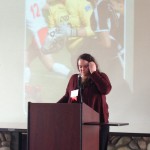