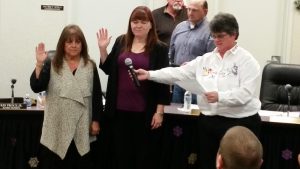 Enrollment in the Denair Unified School District is down 38 students from last spring’s projections, trustees were told Thursday night. The losses primarily are at the high school and middle school, but have been partially offset by continued growth at the district’s elementary charter school.

The decline has implications for the district’s future budgets, Chief Business Officer Linda Covello told trustees. Public districts are largely funded by the state on Average Daily Attendance, or ADA. Covello projects this year’s ADA to be 1,225, which reflects an increase of 20 ADA at the elementary level, a decrease of 34 ADA at the middle school level and a decrease of 24 ADA between the two high schools.

Four years ago, when Denair confronted steeper enrollment declines, all staff took pay cuts while others were laid off. That’s not the case today.

The district’s finances have dramatically improved thanks to the strategic cost cutting as well as the introduction of programs that generated enrollment growth.

In particular, the dual immersion English/Spanish program at Denair Elementary Charter Academy has proven to be a magnet for new students. There now are classes in kindergarten, first grade and second grade, with another grade level introduced each year.

The district also has applied for additional grant funding to increase opportunities for students. Most recently, Denair applied for a CTE Facilities Grant to potentially bring in $1.15 million to expand career technical education programs.

“We currently are examining targeted grants and initiatives, along with program enhancements that will stimulate new growth, particularly at the high school and middle school,” said Superintendent Aaron Rosander. “Continued prudent stewardship of our budget, in tandem with innovative program development, will be important linchpins in DUSD’s future growth and financial health.”

The district anticipates having positive monthly cash balances throughout the 2017-18 school year and an ending fund balance of more than $2.4 million, Covello said.

In addition to enrollment, Covello said pension increases continue to cost the district money. Contributions to the two public pension systems (CalSTRS for teachers and CalSTRS for classified staff) increased $151,000 this year. Both are projected to grow from 1.85% to 3% each year for the next two years, Covello said.

The $16.2 million 2017-18 budget includes the use of more than $1 million in so-called “one-time funds” received from the state over the past few years. Most of that money will be directed to new buildings on the fast-growing DECA campus, new textbooks at all four campuses, and computers and other technology to better prepare those students.

The budget also reflects a $500,000 Clean Energy Grant received from the state. That money paid for the energy-efficient lighting and a heating and air conditioning system installed last summer at DCA.  It also will fund new LED lighting at the Denair High gym and at about half the classrooms there and at Denair Middle School.

The one-time funds have accumulated the past three years, Covello said. By law, they cannot be spent on ongoing expenses such as employee salaries.

Thursday was the first meeting for new Trustees Crystal Sousa and Regina Gomes, who were the top vote getters in a four-way election on Nov. 7. The will serve will serve an extra year – until 2022 – because of a decision in October by the previous board to move trustee elections from November of odd years to November even years.

In other action, trustees: