Denair High School graduate Randy Jones talked about what it’s like being a civil engineer for the City of Turlock. Sarah Jennings of the Paul Mitchell School in Modesto extolled the possibilities of a career in the hair or skin care industries. Explorer Scouts Landon Zamora and Carlos Lerma discussed what it takes to become a sheriff’s deputy.

They represented just a handful of more than 20 potential career paths Denair students were exposed to Wednesday morning during an informative and wide-ranging College and Career Fair.

The point, explained Principal Kara Backman, wasn’t to direct teens down any particular path, but to open their eyes to many different possibilities. Students from both Denair High as well as Denair Middle School participated.

“We really want kids to figure out what their inner passion is and learn about the kinds of skills they need to develop to attain it,” she said.

The presenters ranged from Turlock orthopedic surgeon Scott Calhoun (another Denair graduate) to a myriad of business owners, a real estate professional who also is a life coach, a police detective, someone from the manufacturing industry, dairy and almond farmers, teachers, an auto mechanic, a social worker, a welder and a dental hygienist.

Students were able to sign up for three 20-minute sessions to listen, watch videos in some cases and ask questions.

Jones, Class of 2005, told students how he turned a lifelong love of math and science into a career as a civil engineer. He talked about working together as part of a team to solve problems and create long-lasting solutions.

His latest assignment, he said is an $8 million project to redesign 1.4 miles of West Main Street between Highway 99 and downtown Turlock.

“Most of the homes along the road are 100 years old. The infrastructure also is 100 years old,” Jones said. “We’re trying to have the least impact on people’s lives and build a project that will last another 100 years.”

Answering students’ questions, he said engineers can expect to earn $75,000 to $140,000 a year after spending up to six years in college.

In another classroom, Jennings played an upbeat 7-minute video showing Paul Mitchell’s approach to teaching lifelong skills related to hair and skin care, nails and makeup. All 21 students in attendance were girls and many raised their hands when Jennings asked them if they had considered a career is cosmetology.

She said training takes about a year if students devote themselves to it full time and she encouraged those interested to visit the Modesto salon to see for themselves what it’s like.

“The possibilities are endless,” she said. “It’s really up to you to see your end goal and how hard you want to work to get there.”

Paul Mitchell graduates are working in high-profile industries such as movies, fashion and magazines in addition to in hair salons all over the country, she said. The most versatile can make a very good living.

“If you are an expert in both cosmetology and makeup, you can charge $150 an hour instead of just $50 an hour for makeup,” Jennings said.

Video also was a key part of the presentation from Zamora and Lerna, the Explorer Scouts. The video showed all the different units within the Sheriff’s Department – from patrol to the jail, air and dive teams, forensics, the bomb squad, courts, records and other areas.

Many of the 23 students in attendance indicated they were considering a law enforcement career. Zamora and Lerna encouraged them to join the Explorer Scouts, which can be an important precursor to entering the formal police academy.

Scouts must pass physical tests, an oral exam and a background check before they are accepted. Once onboard, they are mentored by full-time deputies.

“We learn how to talk with people, how to show respect, how to do pat downs,” Lerna said.

Deputies earn $60,000 to $80,000, Zamora said, plus overtime and bonus pay for additional training (like military service).

“Every day is different,” Zamora said. “You never know what will happen. You have to keep your head on a swivel.”

The day began with an upbeat presentation from Torrance Hampton. He is the co-founder & executive producer for G|FCTR FILMS, a motion picture, digital content and brand storytelling collective that works with some of the world’s biggest brands including NFL, Comcast NBC Universal, Aston Martin, and Radio One. He encouraged students to turn their passion into a paycheck.

The morning ended with nearly 300 high school students in the gym, where many of the presenters as well as colleges set up booths to distribute information and answer additional questions.

“I think it was a success,” said high school counselor Cherie Gresham, who coordinated Wednesday’s activities. “Our goal was to connect them with people, to get them out of their bubble.” 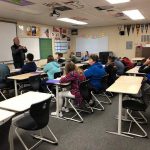 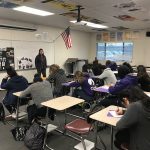 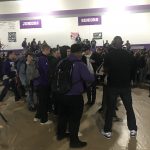 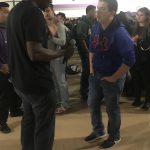